According to Wikipedia, a “Renaissance Man” is someone whose expertise spans a significant number of different subject areas. If Josh stuck with a hobby long enough to gain “expertise” he would be the renaissanc-iest Renaissance Man this world has ever seen. Most people see something that interests them and think, “That’s neat. I wish I could do that.” Then they move on with their lives. Josh sees something that piques his interest and thinks, “Dude, I could totally do that.” He is so serious too. He thinks he can do just about anything. The great thing about life is that people who think they can do anything usually can because the hardest part is trying. Josh takes this to a new level though. We aren’t talking about normal hobbies like grilling or working on cars. Josh reads about a hovercraft in popular science and says, “That doesn’t seem too hard.”

This project didn’t get completed because his mom got sick of a freaking HOVERCRAFT sitting in her basement and threw it away.

Or he gets into slacklining, and then needs to take it a step further and says, “We can totally put that slackline 15 feet up in the trees and do it. We’ll harness in. It’ll be safe.”

Or he gets around his awesome fam and they ALL say, “Yeah we can build a swing, but let’s make it swing out into a 30ft gorge. So what if you have to build a platform to jump off of…this will be sweet.” 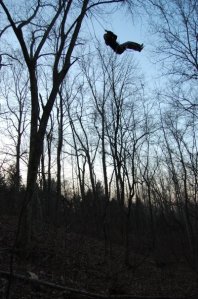 Or he tries to combine all his hobbies and ends up with this photo.

Or a mole comes up on his FACE and he gets it checked out and it’s not cancerous. He doesn’t want to pay to have it removed and I come home to a bottle of gin, an exacto knife, and bloody paper towels on the coffee table because his latest hobby is surgery.

There is no picture of that, thank goodness.

I tried to think of a comprehensive list of the hobbies Josh has had since we have been together and here’s what I came up with:

I wish that Josh would start a DIY blog like our friends at Oh So Pretty. It would be the most amazing DIY blog on the face of the planet. The world basically learn how to be awesome.

Consider this post  my ode to Josh’s awesomeness. This might be the most PDA you’ll ever experience from the two of us.