Well, we’re still in Beaufort. This is definitely a more relaxed adventure at this point, but we’re enjoying it. 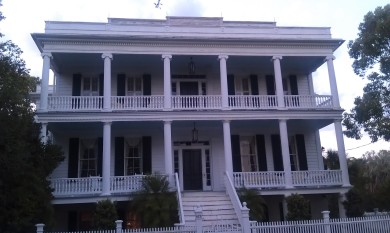 Our home away from the boat

So after our disastrous first outing, we’ve been at the boatyard. They couldn’t haul us out to look at the rudder until yesterday (Tuesday) so we had a chill weekend. My wonderful and amazingly hospitable cousin, Gwen, lives here in a historic house downtown. It’s amazing and has a downstairs apartment she’s letting us use to do laundry and take long hot showers!

On Saturday, Olivia (Gwen’s daughter) and her boyfriend took us out in his boat which was nice. It was good to finally be out on the water, haha! We went out to this place called Monkey Island which is straight from a cheesy Sunday morning Sci Fi channel movie – or Lost. It’s this island full of thousands of monkeys that are literally used for scientific research. There are signs everywhere that say not to step foot on shore or basically a sniper will probably kill you….and we TOTALLY obeyed those signs. We only saw a couple of monkeys, but that’s fine. I read online that they moved the monkeys from Peurto Rico because they had Herpes and were escaping and infecting people. I really don’t want a rogue monkey even TRYING to give me herpes. I couldn’t make this stuff up, people. 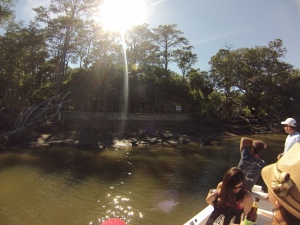 kazoo on its roof. I love random things like this.

How did anyone get into building kazoos for a living? Such a random niche. We also got to build our own kazoos which involves sticking two pieces of plastic together. I do, however, wish I could get a t-shirt since I have been to both kazoo factories. It sort of breaks my heart that one doesn’t exist.

People freaked and thought this was a pregnancy test, haha.

Monday, we went to see a lighthouse on Hunting Island. The beach there was gloriously trashy. Like…in an East Nashville best way possible sort of way. It was packed as we suspected. Also, you can apparently smoke all the weed you want there and the park staff doesn’t care. Pretty sure everyone except us was high and the guy riding around on his four wheeler pretending to work either didn’t care or doesn’t know what weed smells like. It was entertaining. The lighthouse ended us being really pretty but not half as entertaining as people watching.

So, Tuesday rolled around and the boat got hauled out. Apparently we hit an oyster bed on our first outing (worst boat drivers ever right here). Josh’s friend, Zac, is in St.Augustine on his boat and told Josh “just don’t hit anything” and we already failed at that one. However, we were on the correct side of the buoy and our depth sounder read fine, so it was more of a fluke than

our ignorance (So we will tell ourselves). Hitting that did a number on our rudder. It cracked it and bent some metal something that’s important and I don’t know how to explain via blog.

We debated for a long time on what to do. Sell the boat and move on, or throw the money into it. We decided to throw money at that sinking pos!

Really though, even if we can’t go far and don’t recover all the money and can only sail for a week at least we tried. Special thanks to Alex Vucelich, Zac Stepp, and Adam Smith for making Josh feel like he’d be a worthless loser if we  quit. We also sort of figured selling our boat in this shape wouldn’t get us much and if we repaired it, we’d hopefully be able to sell it for more money.

So, here’s hoping that we’ll soon have more exciting blogs to post than “our boat is still broken”.

One thought on “Stuck but happy By:Allison”