So here is the promised real post about what we’ve been up to (besides dreaming of being on Reading Rainbow).

The last you heard, we were leaving Jacksonville. We tried to make it all the way to St.Augustine in one day but that would have been a long day. Long days are not our thing. We motored through some really straight and narrow (insert bible verse joke here) parts of the ICW that were lined with huge houses. It was pretty cool, actually, and a really easy day. 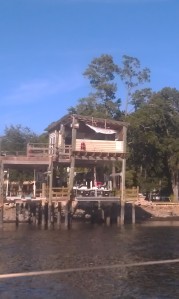 This house had it’s own bar on the upper deck.

One of the houses on this section of the ICW

We pulled into our anchorage behind a large trawler. Josh was at the wheel and I was up front ready to drop the anchor. Josh pulled into our spot and started backing up which I thought was my cue to drop the anchor. Usually I would pull out the rode to a good length and cleat it off before throwing the anchor over. I can’t remember why I didn’t, but I didn’t. No big deal though because there is 200′ of rode AND supposedly a knot in the end of it that keeps it from all going overboard. So I drop the anchor and Josh is backing up, and keeps backing up. I try to cleat it off quickly, but that squishes my fingers and gives me rope burn even though I’m wearing gloves. I yell at Josh to go forward but he doesn’t even realize that I dropped the anchor. He was just backing up INTO the spot he liked and away from the trawler. Oops. Communicating over a rumbling engine under stress is not our forte. So, when I tell Josh to go forward, he just yells, “WHY?” I’m thinking, “What the heck do you mean WHY?” and screaming, “JUST DO IT!” I’m still trying to grab rode and getting rope burns galore but still not too worried because – like I said – there’s a knot in the end. Except that there wasn’t. So about the fourth time Josh asks why I turn around to see our anchor, chain, and rope all disappear into the water. I momentarily consider jumping in after it. Josh momentarily considered shoving me in after it I’m sure.

Needless to say there was a lot of frustration and anger and not so nice words thrown around that night. However, the good thing about a boat is that you better get over it quickly because we only have 30′ of space to share and we also have to problem solve pretty quickly. So, we threw our extra anchor over and devised a plan for the morning. Luckily our GPS had tracked our movements so we could sort of tell where I threw the anchor over.

HOW TO FIND AN ANCHOR YOU DROPPED

Step 1: Stop yelling at each other about whose fault it is WHY the anchor is on the ocean floor in the first place.

Step 2: Get a small dinghy anchor on some rope, your GPS (if you were lucky), and some sort of float.

Step 3: Get in the dinghy and drive over to where you think you dropped the anchor.

Step 5: Laugh about all the mean things you said to each other.

Step 6: Tie a float onto that newly recovered rode and head back to our boat where you will TRIPLE CLEAT THAT RODE TO YOUR BOAT. Pull up your anchor and head on down the road.

It really was that simple. We lucked out with the GPS thing as it was spot on.

While we are talking bout anchors, let me tell you about our favorite anchoring technique – the kellet. Before we left, Josh made a kellet for our boat. This is basically any sort of weight that you can slide down the anchor rode. The theory is that this helps the anchor rode to lay closer to the sea bed which improves the anchor’s holding power. You can see some good pictures here. This website suggests a 25-35 pound kellet for a 35 foot vessel. Our boat is 30 feet and Josh overkilled it with a 40 lb. kellet. He basically took a length of pvc pipe and filled it with weights from goodwill and concrete. He capped off the ends and added to U-bolts – one to each end of the PVC pipe. The kellet has its own length of rope attached to one boat that we use for lowering and raising the kellet. The other U-bolt clips onto the anchor rode.

We have not drug ONCE using this system. Honestly, we’ve never put out the recommended 7:1 ratio either. For you landlubbers, everyone tells you to put out 7 feet of rode (the chain/rope combo the anchor is on) for every foot of water where you are anchoring. So, if you are in 10 feet of water you need 70 feet of rode out. That’s a lot and it means you can’t anchor in tight spaces without doing some fancy anchoring. With the kellet, we MAYBE did 4:1…5:1 if the weather was bad. We still never drug our anchor. Everyone will also say Danforth anchors suck, but that’s what we’ve got.

Basically, to each his own but just know you don’t have to spend $300 on a fancy shmancy anchor and tons of chain. A bag of concrete and some Goodwill weights has worked for us.

4 thoughts on “How to Recover an Anchor (and your dignity) – By:Allison”