So, you know us. We are The Tinii – Josh and Allison. Obviously we are a part of JLF.

However, there are quite a few other “farmers” on our little slice of country life in the city. It all started when we were moving to Haiti and two of our best friends, Casey and Savannah, decided to rent the upstairs of our house. When they did, they also decided to get chickens with the guys across the street (you’ll meet them later). Chickens obviously mean you live on a farm. Thus, the first use of “Joyce Lane Farms.”

When we knew we were coming back from Haiti, Josh and I decided that we would move into the basement apartment to save money and do some repairs that needed to be finished. The girls were fine with that too. We knew Casey and Savannah from church and also knew that we had a shared desire to live communally with other people. Not in a creepy hippie commune kind of way, but just in an intentional hey-let’s-do-life-together way.

Casey and Savannah are a blast. They run a blog/brand called Hey Wanderer. Casey is a nurse and Savannah works on Hey Wanderer full time. They’re both big dreamers and we get a long really well. Plus we all think brinner is the most important meal of the day. It’s like our Breakfast At Tiffany’s…it’s that one thing we have if everything falls apart.

What you need to know about Casey: 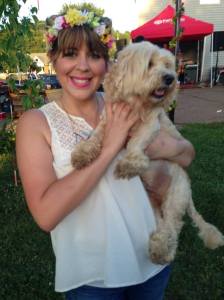 Casey loves waffles more than almost anything. She loves Jesus and her dogs more than waffles but waffles are up there. If you need someone to convince you to do something you really want to do RIGHT THIS SECOND, Casey will be that person. When we talked about wanting chickens she had looked up a Craigslist ad and called the lady and told her we were on our way faster than you can say, “Casey loves waffles.” She is a good person to get advice from because she’s super honest. She wishes she could be Stevie Nicks and tried to have a puppy party for her last birthday. She hates going to the grocery store almost as much as she hates Monsanto – and that’s a lot. If Casey had a spectrum of love-hate, it would look like this…. Jesus – Whitt and Winston – waffles – all the stuff in between – going to the store – Monsanto – Satan himself.

What you need to know about Savannah: 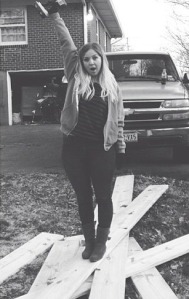 Savannah is half Mexican and she introduced me to something called migas and I love her for it, but she doesn’t speak Spanish so there’s that. Savannah’s head is Pinterest-famous. She has this one hair tutorial that I’ve seen no less than 50 bagillion times. You’ve probably seen it too.

Savannah gets s*** done. For real – she’s a boss and I’m convinced she can do anything. She can sew kimonos, dye hair, build chicken coops, and make migas. She doesn’t mind going to the store which means she’s always going to the store because Casey hates it. Savannah has never, ever affectionately touched Casey’s dog Whitt (can’t blame her). Not even a pat on the head. She’s from Texas and writes music as well as makes clothes for a living which is amazing. She has the best hair in all the world and I’m super jealous of it. Josh probably is too if we’re honest.

So that’s Casey and Savannah.

Tune in next time to meet the Stallons Brothers….